The Northwest is one of the primary onion-producing regions in the U.S. Onions from the Northwest are fresh packed or processed by large, vertically integrated farms and privately owned packinghouses. From September to May, Northwest onion producers supply major markets, with most of their fresh product moving east to the larger population centers. Some of their crop is exported. 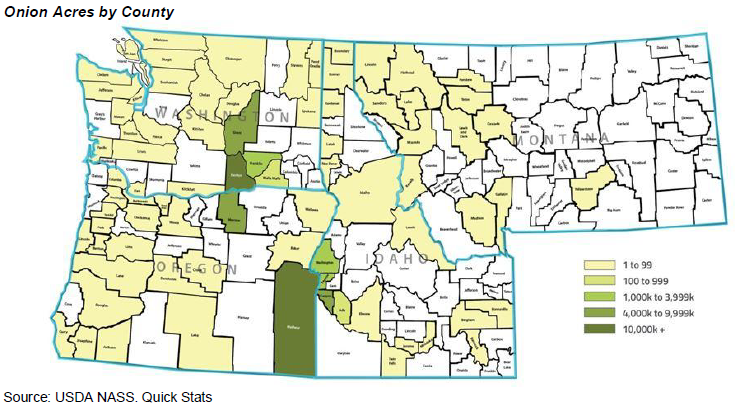 Irrigation differs between regions. Locations with well water and direct access to river water benefit from fewer water impurities compared to water from canals. Sprinkler irrigation results in more potential for bacterial damage in the necks of the onions.
Planting occurs in March and April. Harvest begins in August and continues into October. Onions are harvested by lifting the entire plant from the ground and letting the plant dry, or cure, for seven to 10 days. Once the onions are cured, they are gathered and transported from the fields. Onions are then placed into sophisticated storage facilities, often equipped with heat and refrigeration.

Value Chain
Onions are marketed as either fresh or processed. Fresh-onion consumption includes home and foodservice uses. Processed onions are most commonly frozen or dehydrated; they are also canned or included in other food products. Large, vertically integrated producers may conduct marketing. Growers may also sell onions directly to a packing shed, which provides services that may include post-harvest handling, packing, cooling and transportation. In both marketing processes, bulbs are sorted and packed mainly into 50-pound sacks or into consumer-friendly packages.

The market for fresh and processed onions leverages a combination of open marketing and contract pricing. Some processors and fresh-pack processors seek to forward contract a portion of their annual inventory supply. Early contract negotiations begin to establish market expectations for each crop year and contract pricing offers some market risk protection to producers, packers and processors. However, because the majority of onions are sold into the fresh market, open-market pricing drives the onion market.

The onion market can be volatile. Prices often change dramatically with small shifts in supply. The unique seasonality and storability of onions add to their market volatility and price variance. Most onions grown in the United States have a limited storage life of one to two months. However, onions grown in the Northwest are exceptional because they can be stored generally from six to eight months, depending on the type of onion and the storage facility. This allows onions from the Northwest to be marketed from September through April.

Idaho and Eastern Oregon onions are marketed under a federal marketing order that authorizes grade, size and pack regulations. Most other onion-producing areas in the United States do not operate under a marketing order. Given the disparity of onion-growing regions across the United States and the onion industry's propensity to be less organized than other commodities, total seasonal production is frequently difficult to assess. Accordingly, even the perception of oversupply or undersupply in the market can have a marked effect on prices.

Growth in the size of the marketing companies selling fresh onions will continue. Consolidation at the retail and foodservice level is resulting in a demand for larger sales organizations that can provide larger volumes of produce and be able to source produce for periods that often exceed local marketing seasons.

Industry Drivers
Onion Demand
Demand for fresh produce in the U.S. continues to increase. Per capita onion consumption rose 70 percent between 1982 and 2014, increasing from 12.2 pounds to 20.6 pounds. Factors driving demand include consumers' interest in healthy diets, increased use of onions in ready-made meals, and onions' popularity among Asian and Hispanic consumers, the fastest growing racial/ethnic groups in the U.S. whose diets include more fresh produce than the general population.

Onion Breeding/Varieties
Advances in onion breeding are creating varieties with improved yields and storability. Depending on the variety, breeding enhancements include uniformity in round bulbs or foliage that performs well under heat stress and has an increased bolt tolerance (resistance to premature flowering) and storage potential, with some varieties storing up to six months. Varietal improvements provide growers opportunities in new and different growing practices, market segments and pricing windows.

Irrigation
Drip irrigating onions was introduced approximately 20 years ago in the Columbia Basin. Today, more than a third of Columbia Basin onion growers use drip irrigation, while adoption in the Treasure Valley is increasingly popular. Benefits of drip irrigation include lower fertilizer costs; significant reductions in water use and nitrate leaching; increased control of insects, iris yellow spot virus and weeds; and increased onion size and marketable yield. Tradeoffs include added costs and increased attention to irrigation system design and maintenance.

Appendix A
Best Practices
To survive in competitive industries, onion producers must focus on many business aspects at once. Basic production factors such as planter spacing, irrigation timing and weed management are necessary to grow a good crop, but additional actions can help ensure long-term viability in an industry and even provide a competitive edge. Best practices for row crops are grouped by their area of applicability and include production, marketing, labor management and cost containment.

Production
Onion producers and industry specialists have worked closely to develop practices and technologies that will increase yield and/or quality. Best practices in production include:
Onion growers are increasingly using drip irrigation. While the cost to use a drip irrigation system is higher than traditional irrigation methods, the benefits include:
Growers can add efficiency by analyzing the costs and benefits of drip technology and using it when appropriate.

Another best practice is the ability to effectively manage the thrip population that spreads the iris yellow spot virus. Best practices in thrip management include timely and aggressive applications of insecticides, field selection that distances onion production from thrip habitat and longer crop rotations.

Marketing
Few row crop producers are large enough to take on the challenge of marketing their own crops directly to the consumer, so most producers rely on a processor or fresh packing facility to take care of marketing. However, producers can increase the demand and marketing potential of their crops by using the following strategies.

Differentiation: Onion producers can differentiate their crops in the marketplace. Changing production methods to certify crops as organic, or working with processors to grow specialty varieties such as Walla Walla Sweet onions, are examples of differentiation.

Vertical integration: Onion grower groups and producers have invested in fresh-packing facilities and others have expanded into processing or dehydrating facilities.

Each of these options may have the potential to increase revenue, reduce costs or even maintain a market for growers. However, each also has the potential to dilute capital and push an individual or grower group beyond core competencies, so producers must carefully evaluate available opportunities.

In the case of fresh-onion integrated operations, capturing packing revenues helps hedge against price variability. In the Columbia Basin, most independent fresh-onion growers are also packers. Onion packers must be cost competitive and represented by or operate a best-of-class marketing desk.

Labor Management
Best practices in successful labor management focus on strategies to retain better-educated and trained workers by:
Cost Containment
Managing costs remains a critical component in guiding an operation toward profitability. Best practices in this area include:
While the adoption of various technologies is a proven way to cut production costs, it usually requires a significant capital investment. Growers must perform a cost-benefit analysis to determine whether capital investments provide the increased return to make them viable.

Appendix B
Glossary
Fresh-pack processors - Fresh-pack sheds are focused on packaging certain sizes of onions normally in 50-lb bags. Although smaller consumer packs are becoming more prevalent, they have yet to overtake the normal 50-lb bag production. Fresh-pack sheds sell to retailers, brokers and restaurants. The majority of onion sizes packaged include medium (2"-3 1/4"), Jumbo (3" and up), Colossal (3 3/4" and up) and Super Colossal (4 1/2" and up). Smaller sizes are used in some cases but are not as common.

Iris yellow spot virus - Virus transmitted by onion thrips, which are tiny, milky-white insects. Symptoms include yellow- to straw-colored lesions on leaves. Once the virus takes hold it brings down and kills the whole plant. Iris yellow spot virus affects yield and quality of final product.

Yellow bulb onion - The majority of varieties grown in the Treasure Valley are yellow onions. Varieties include but are not limited to Vaquero, Joaquin, Granero and 1600. Yellow varieties make up about 87 percent of the total crop produced. Yellow onions can also be referred to as sweet onions.