Drivers for the cattle industry include price volatility spurred by changes in global beef demand and supply chain continuity. 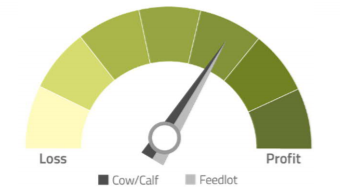 Across the Northwest, drought is reducing hay supply and pasture conditions are poor. Absence of feed is forcing cow/calf producers to carefully evaluate breeding stock for retention. Lacking pasture, cattle producers are faced with the choice of buying expensive hay or liquidating livestock.

Demand
Demand for beef is strong going into the summer grilling season. However, consumers will see higher prices at the grocery counter. This is a combination of factors including increased demand, feedlot capacity and current bottlenecks in processing. As drought starts to plague much of the western United States, producers are having to compete for feedlot space because of poor pasture conditions. Feeders are unable to get fed cattle to harvest with current slaughter capacity constraints.

Supply
Supply of cattle maintains a trend above 2020, and previous 2015-19 average levels. Feeder steer prices hold steady around the $1.20 and has stayed above the 2020 average since late March. A decrease in prices is expected going into the fall marketing run.

Fed cattle on the market has decreased from just over 2 million head to 1.92 million head. This reduction in marketing could be attributed to bottlenecks in the supply chain at the slaughterhouse level. As compared to this time last year, prices are up for all cuts. Dressed steers and live fed steers are up 15%, and dressed steers are nearing the $200/cwt mark at $190.66/cwt.

The corn market’s current conditions could prove difficult for cattle producers. Along with ending stocks declining and prices increasing domestically, foreign corn producers are not fairing well. Brazil and Argentina are facing drought conditions. This is a triple threat for feeders and cow/calf producers that could look to feeding grain to make up for insufficient summer grazing. However, this is good news for corn producers who are estimated to increase production for the 2021-22 crops.

Sales of Breeding Animals due to Drought
Drought conditions can force cattle producers to sell breeding stock to make up for shortcomings in pasture and hay conditions. While this can be a devastating move, the IRS has a tax deduction to help soften the impact.

Officially known as “Involuntary Conversion of Draft or Breeding Animals,” IRC section 1033(e). A livestock producer who sells more draft, breeding or dairy animals than normal due to weather-related conditions may defer recognition of the gains for up to two years. The replacement period may be extended under specific situations, such as the drought does not end within the two tax years following the year the livestock were sold. If breeding livestock are sold in 2021, this would allow producers to replenish herds in 2022 and/or 2023. The animals must be replaced within two years with other animals used for identical purposes (i.e. breeding beef females with breeding beef females). If the animals are not replaced within the allowed time, the taxpayer will have to amend their tax return for the year in which the animals were sold and pay all applicable taxes and (possibly) penalties. The taxpayer must have farming as their principal trade or business, use the cash method of accounting, and be able to show that, under usual business practices, the additional number of animals would not have been sold.

Sale of Non-breeding Animals due to Drought
If drought causes a producer to sell non-breeding stock, IRC section 451(g) provides a tax break. A livestock producer using the cash method of accounting can elect to defer the income of certain livestock (i.e., calves, yearlings, market animals) for one tax year. Again, this pertains to only the number of animals sold in excess of the normal number sold.

The USDA’s Livestock Forage Disaster Program (LFP) is available to livestock owners and contract growers. Elligble producers are those with grazed forage crops that suffered a loss of grazed forage due to a qualifying drought. This can be on private or federal land if the federal agency prohibited grazing due to fire.

This year, the USDA RMA announced several beneficial changes to the Livestock Risk Protection (LRP) policy, drawing the attention of producers. They increased the premium subsidy by 15%, made premiums due at the end of the insurance period instead of the beginning, and made insuring unborn calves an option.

The other policy that has been popular for several years now is the Pasture, Rangeland and Forage rainfall insurance policy. Many producers, both large and small, purchase this insurance to add additional risk protection for their operations during droughts like this year. Hay growers have also started to participate in this program. Most loss ratios are 150%-300%. Sales closing is Nov. 15, 2021 for 2022.

JBS USA Holdings, Inc. paid an $11 million ransom to cybercriminals who temporarily knocked out plants that process about one-fifth of the nation's meat supply. The Bitcoin ransom payment was made to shield JBS meat plants from further disruption and to limit the potential impact on restaurants, grocery stores and farmers that rely on JBS. The attack on JBS was part of a wave of incursions using ransomware, in which companies are hit with demands for multi-million dollar payments to regain control of their operating systems.

For more information or to share your thoughts and opinions, contact the Business Management Center at 866.552.9193 or bmc@northwestfcs.com.